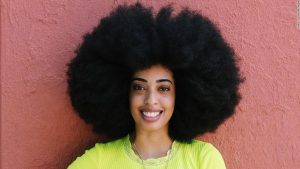 The 32-year-old fashion designer officially broke the Guinness World Record with her afro measuring in at 8.07 inches tall, 8.85 inches wide, and 4 feet and 10 inches in circumference to beat Aevin Dugas who previously held the position for 8 years.

Williams’s natural hair journey started years ago as a way to save money and move out of her father’s house after graduating from college. Before going natural, she says, she would spend upwards of around $50 to $100 every two weeks to maintain her hair in its permed state. “The plan was to go back to perming after I moved but I started seeing so much new growth,” she adds. “And I’m like, wait, I haven’t seen like my texture and so long and so I just kept it going.” She describes the journey of growing her hair to record-holding status as being filled with ups and downs as she learned to understand her hair type and what worked best for her to retain growth. When she finally decided to apply for the Guinness World Records, she was filled with doubt about whether she could ever accomplish such a feat. “I would have never thought that I would be a world record-holder now, but it just means so much,” she expresses. “I get messages from people all over the world telling me you’re an inspiration and you inspire me.”

Williams recently shared her hair routine and it’s a delight to watch.