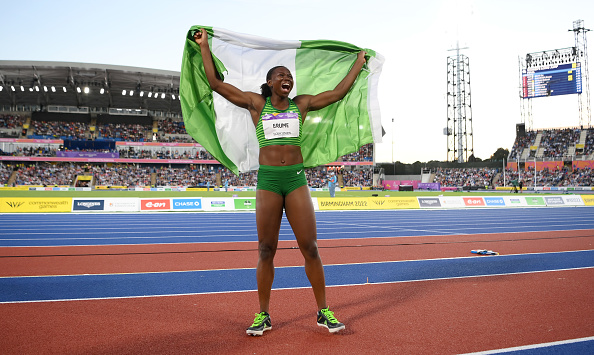 Ese Brume has won gold for Nigeria in the women’s long jump at the 2022 Commonwealth Games in Birmingham, United Kingdom.

Brume put herself in a commanding position for the gold medal after her fourth attempt gave her a new Commonwealth Games record of 6.99m.

The 26-year-old broke the Games record again a few minutes later with her last attempt, after a leap of 7.00m to put her way ahead to clinch Nigeria’s last gold of Day 10.

Brume had a no jump on her first attempt but bounced back right away to jump 6.99m to take the lead in the final and set a new Games Record.

Brume has been arguably Nigeria’s most consistent athlete over the past four years.

She burst onto the scene by winning gold as an 18-year-old at the 2014 commonwealth games in Glasgow but could not defend her title four years ago in the Gold Coast in Australia.

However, since then, She has been on a consistent run, winning bronze at the World Athletics Championships in Doha in 2019. She followed that up by winning another bronze at the Tokyo 2020 Olympics.

She took it up a notch higher by winning silver at the World indoors in March before matching the feat on the biggest athletics stage in Eugene, Oregon two weeks ago.