Home » Cover » Journalist, Singer, Activist, Actress, Author: Everything You Should Know About The Life Of Nigerian Legend, Onyeka Onwenu 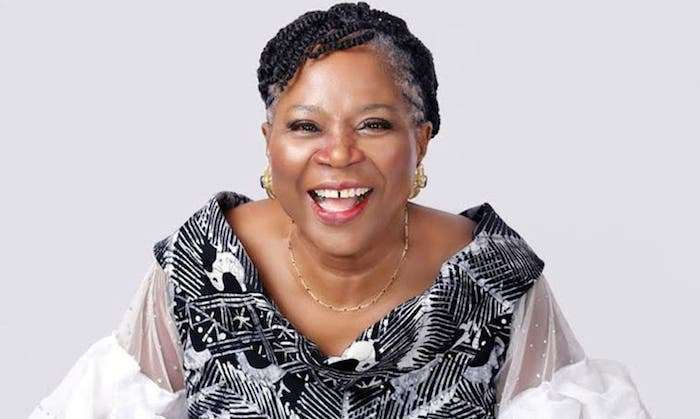 Onyeka Onwenu would go down in history as an enigma and one of Nigeria’s most talented personalities. It is no surprise she wears many hats.

Onwenu has made giant strides in Nigeria and globally as a journalist, singer, actress, politician, and activist.

She recently turned 70 and here’s everything you should know about her. 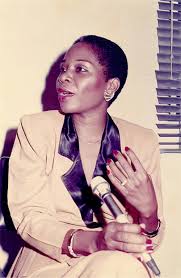 Onyeka Onwenu was born on January 31st, 1952. She hails from Arondizuogu in Imo State but grew up in Port Harcourt.

She is the youngest daughter of the Nigerian educationist and politician D.K Onwenu. Her father died when she was four years old in an auto crash. 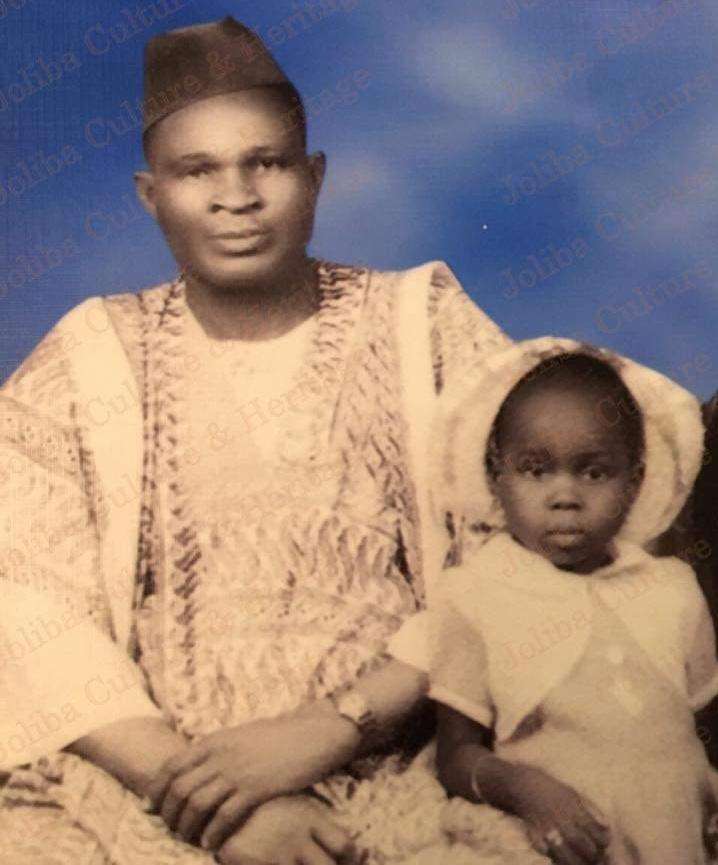 Onwenu bagged a BA in International Relations and Communication from the Wellesley College, Massachusetts, the USA, and a master’s degree in Media Studies from The New School for Social Research in New York.

Her career boasts of her achievements in broadcasting, music, acting, politics, and writing.

She worked at the United Nations in New York as a tour guide before returning to Nigeria in 1980. She completed the mandatory one-year National Service, at the NTA where she made an impact as an articulate, incisive, and fearless reporter.

In 1984, she wrote and presented the internationally acclaimed BBC/NTA documentary called Nigeria, A Squandering of Riches which became the definitive film about corruption in Nigeria as well as the intractable Niger Delta agitation for resource control and campaign against environmental degradation in the oil-rich region of Nigeria.

Onwenu was a former member on the board of the NTA. She was nicknamed ‘The Elegant Stallion‘ by the media, and the alias has stuck to date. 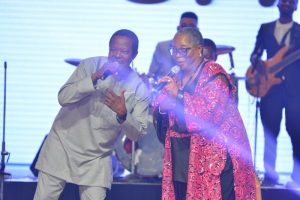 Onwenu began her music career in 1981 while still working with the NTA, where she released her first album titled “For the Love of You”. Her second album, Endless Life was produced by Sonny Okosun.

She followed it with her third album In The Morning Light (1984). Recorded in London, it featured the track “Masterplan” written by close friend Tyna Onwudiwe. Her fourth album was One Love (1986).

Onwenu collaborated with veteran jùjú artist Sunny Ade on the track “Madawolohun (Let Them Say)” which appeared in 1988’s Dancing In The Sun.

The pair also worked on two other songs together, “Choices” and “Wait For Me” – centered on family planning, and were endorsed by the Planned Parenthood Federation of Nigeria who used “Choices” in their Public Service Announcement (PSA).

She released the self-titled ‘Onyeka!, her only album with the label in 1992 before she made the transition to Christian/gospel music.

Onwenu protested against her former employer NTA in 2000 over their refusal to pay royalties on her songs. NTA 2 Channel 5  “Iyogogo“, a track from the Onyeka! album had been used in station idents by NTA 2 Channel 5 without asking her permission which led to the then-director general Ben Murray-Bruce blacklisting her from transmission.

She embarked on a hunger strike outside the station’s premises and this attracted widespread reactions from support. After six days, Onwenu and NTA were able to reach an agreement regarding royalties.

Originally a secular artist, she now sings mainly gospel music and continues to write and sing about issues such as health (HIV/AIDS), peace and mutual coexistence, respect for women’s rights, and the plight of children.

In 2013, she was named as one of the three judges on the Nigerian version of The X Factor.

A member of the People’s Democratic Party, Onwenu contested twice to become Council Chairman of her Local Government Area Ideato North in Imo State but lost on both attempts. As a consolation, she was appointed Chairperson of Imo State Council for Arts and Culture by former governor Ikedi Ohakim.

On the 16th of September 2013, President Goodluck Jonathan appointed her the Executive Director/Chief Executive Officer of the National Centre for Women Development.

Onwenu is also a prolific actress, having featured in a number of movies alongside top local acts.

She played the role of ‘Joke’, a childless woman who adopts an abandoned baby in her first movie, Nightmare.

In 2006, she won the Africa Movie Academy Award (AMAA) for “Best Actress in a Supporting Role” for her role in the movie “Widow’s Cult”.

She was also nominated same year by AMAA for “Best Actress in a Leading Role” in the movie “Rising Moon”.

In 2014., She featured in the movie, ‘Half Of A Yellow Sun’ alongside Chiwetel Ejiofor and Thandiwe Newton. and also in ‘Lionheart’ in 2018.

Onwenu has won numerous national and international awards. She was bestowed with the “Nigerian Woman of Distinction” Award, at the country’s 50th Independence Anniversary Celebration, by the First Lady of Nigeria, Her Excellency Dame Patience Jonathan.

She is also a recipient of the National Award – MFR(Member of the Federal Republic), given to her in 2003 by the former President of Nigeria, His Excellency Olusegun Obasanjo as well as a National Council for Arts and Culture Awards, in recognition of her contributions to the field of Music and Cultural Administration in 2009. 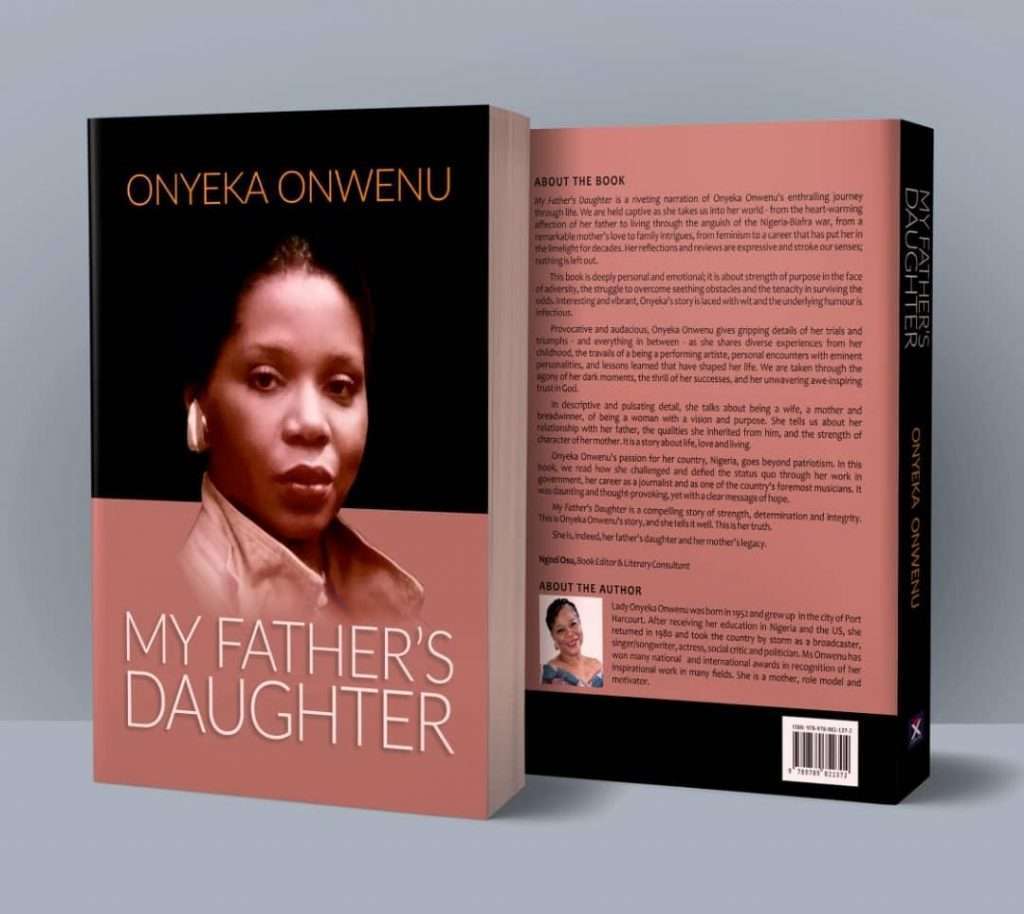 Onwenu released her memoir titled “My Father’s Daughter” on October 1st, 2020 to commemorate Nigeria’s 60th Independence anniversary. In the autobiography, the iconic musician shared details of her private life in ways she had never revealed before.

The memoir explores Onwenu’s formative exposure to feminism and how her father’s life heavily influenced her decision to join politics and how the Nigerian Civil War of 1967 – 1970 created a scar on her teenage experience.

She also shared her experience of being sexually harassed in a workplace and how her decision to leave got her a job at the UN, about going back to post-war Nigeria, and being confronted by the failing political system. She revealed the challenges and problems in Nigerian politics and revealed her surprise that the ills prevalent during independence are still prevalent in the current political environs of the country.

The book also examined aspects of her personal life that were hitherto unknown to the public e.g her failed marriage.

On 29th January 2022 during a press briefing, Onwenu announced that her book will be adapted into a TV series.

Filmmaker, Izu Ojukwu, who is famous for projects such as Amina, Women’s Cot and 76, will direct the series; while Chichi Nworah and Ngozi Osu will serve as producer and editor respectively. 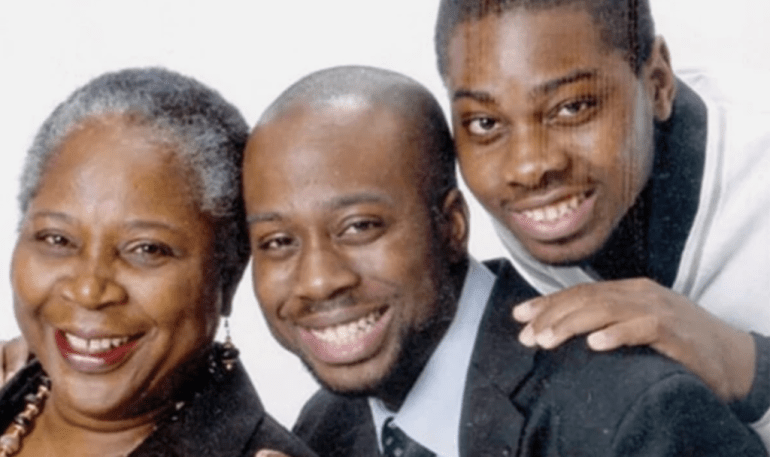 Not many knew until recently that Onwenu was once married as she is a very private person. She fell in love and married a Yoruba Muslim in 1984 and the union produced two boys, Tijani and Ibrahim who changed his name to Abraham.

ALSO READ: ‘Staying In My Marriage Would Have Killed Me’ – Onyeka Onwenu