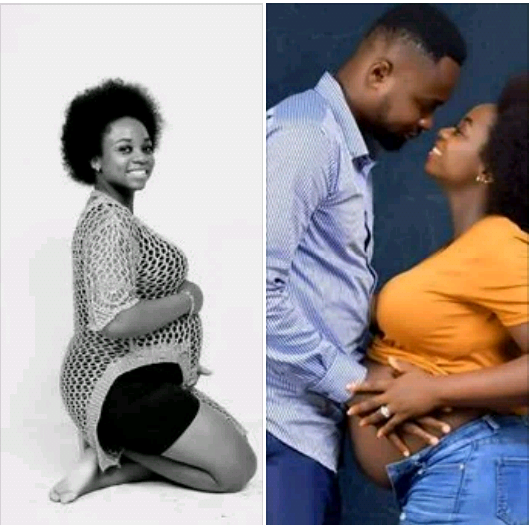 A Nigerian woman, Ekeng Njuare-Asandia Inyang from Cross River state, who conceived after battling with endometriosis, PID, and Ovarian Cyst has shared her experience.

Sharing lovely photos of her baby bump along with her husband, Andrea Ekeng Inyang, she revealed how church members, certain friends, and other people mocked her throughout the trying period.

Three weeks to my introduction what should have been a normal period turned to non-stop bleeding. Hubby then-fiancee took me to the lab where I was told I had endometriosis, PID and Ovarian Cyst. The doctor told me to bring a deposit of 40k to commence treatment immediately cos if I delayed further I could bleed to death and that the earlier I arrested the case the larger my chance of conceiving as delay could make me unable to conceive.  I told hubby about it and I remember his question “Is that doctor God, what makes him feel he can conclude on you,”

“I met another doctor who gave me one tab and the bleeding ceased but he insisted I commenced treatment so I won’t have issues conceiving. After we got married, hubby suggested we wait a year or two first before making babies and I hurriedly agreed but few months into the marriage, pressure from left, right and center made me want to conceive that same year so I started trying quietly without telling hubby…

“Again I went to the hospital and another medical report was given… Hormonal imbalance and fibroid. Life became hell for me. I told hubby and thought that would worry him but again he made a shocking statement …he said: “When we’re ready the baby will come, keep the money you want to go, and waste on treatment let’s flex first, there’s nothing wrong with you”.

I got angry and decided to silently try so I went and paid 40k and treatment started so every month I’d expect to miss my period but the period would come and that would make those three days bitter days for me.

“I started praying and fasting too and each time I mentioned it as prayer point hubby would open his eye and reluctantly pray about it then one day he reminded me that we had an agreement and have to together walk with that agreement. I switched to herbal and there’s hardly any root, herbs, enema, I didn’t take…I’d drink, chew and pump my belly but every month the result remained the same.

“Prophecies came from different directions… Some said my womb had been tied and I would never be able to conceive again, some said there was a pot swallowing my babies, etc… Medically I wasn’t fit, spiritually I lost it and physically I gave up.

Thanks to when women pray fellowship where I got most encouragement, my mum and dad never ceased praying for me… Good friends and family members also stood in the gap. I don’t even want to talk about the insults I received. I remember one mother’s day I wished myself a happy mother’s day and a friend came under my post to remind me that I wasn’t a mum yet…another person on my birthday post asked why I hadn’t conceived yet. Street people who didn’t know I understood Efik ridiculed and insulted me, church members kept looking out and stylishly mocking me to a point I stopped going to church.

All the while hubby kept telling me not to worry that I’d have babies when it was time and he also tried his best to make me feel better each time I felt down and hopeless. I can’t remember my many bitter experiences but believe me two years of trying was like 20 years. I lost weight from thoughts and couldn’t go myself to worship God as I wanted but you know the suprising part of this? All that while I kept praying for people seeking the fruit of the womb and out of 5 I prayed for 4 took in. I never really stopped been committed to God and service in my unit in the fellowship I belong. I encouraged people around me and told them about the God of impossibility.

2019 December I told myself I was done asking and trying…I’d switch to praise. So every day instead of complaining or crying as usual, I’d sing and dance and appreciate God… Most times I’d get clothes and put in my tummy like a pregnant woman other times I’d hold some pieces of clothes and hold like a baby, I bought few babies things and I was hopeful and joyful.

“Towards the end of that dec.2019 hubby asked when I’d be ready to have babies and I said by October 2020… He said get ready that’s what would happen. Don’t get it twisted, hubby wasn’t been careful, he didn’t even know how to count my safe days and we had a couple of times as often as we wanted. He only exercised faith and prove that there’s power in agreement.

“January 2020 he held my womb and prayed on it. Told me to get two test strips that if one didn’t come out positive the other would. February 2020 I tested positive and well to me it wasn’t real. I kept it away from everyone else until the third month when the scan confirmed it.

This is it…there’s power in the tongue and faith makes all things possible. I only needed patience but I lost it completely. I wasted monies buying drugs and taking herbs. I wasted time crying instead of dancing. I let people get to me with their insults and mockery. That’s not what moves God…he’s moved by faith and praise.

“Sir, the battle of infertility isn’t for wifey alone. Give her a helping hand. The moment hubby stood in agreement with me, the story changed. We didn’t take any pill or see any doc…we only praised, prayed, and applied faith and God showed up speedily. It was in my seventh month that he told me he too had small worries but just wanted to always encourage me instead. He talked did how my tears worried him but he decided to be strong as both of us could not be weak. He too had his share of “una no want born” questions to answer. Not for one day did he make me feel bad… The reason I don’t joke with my hubby.

“Sis, it’s not time to give up. Whether you’ve waited ten years or fifty. Whether doctors said you can’t have a child again, the question is…what did God say? Forget prophecies and lies from the devil it will only make you miserable. Keep being hopeful, thankful, and grateful. The reason God’s allowing it to take long is so that when it happens the world would celebrate with you. If I can be a mum today, you too can be a mum.

“Now to every one of you waiting on God for the fruit of the womb, I join faith with yours and decree that it is done. Get ready cos this time next year we’ll celebrate you. God says you’re fruitful and yes no pit of hell can say otherwise.
Congratulations…it is done!” 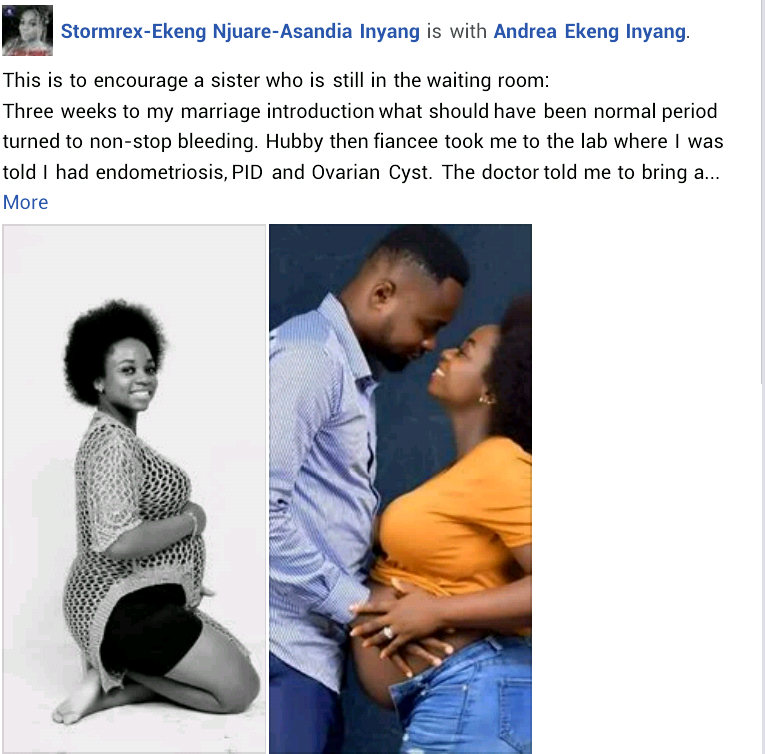 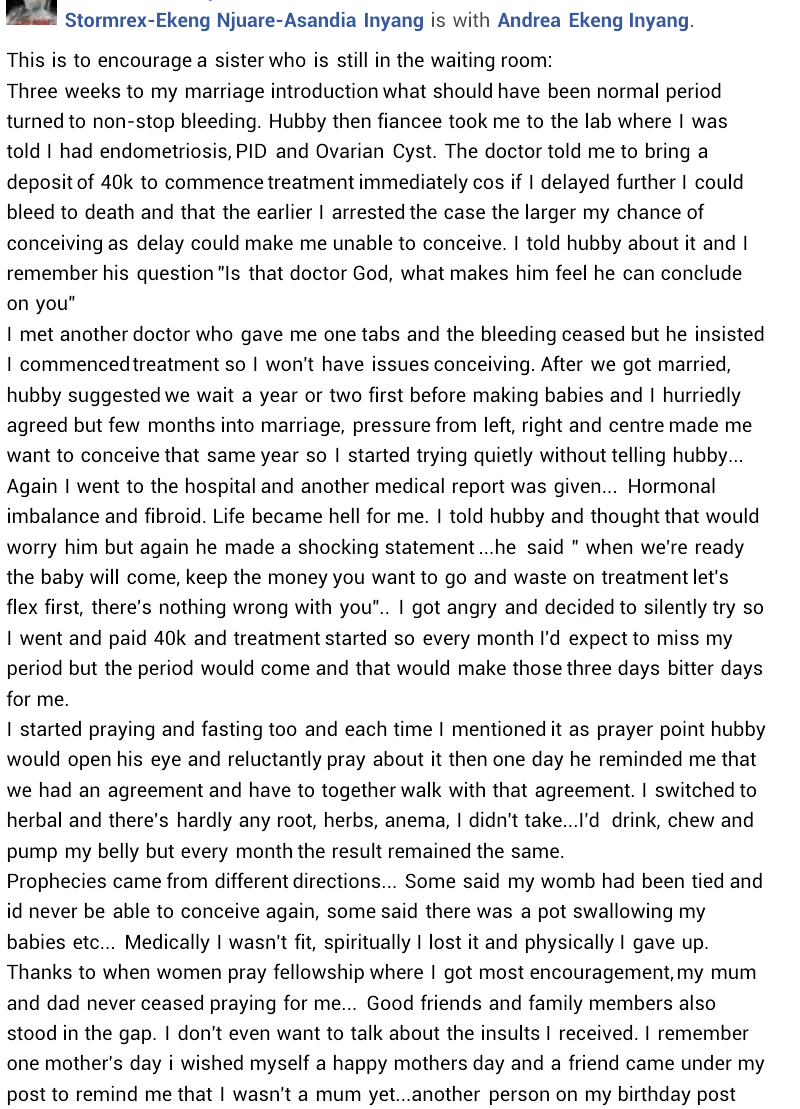 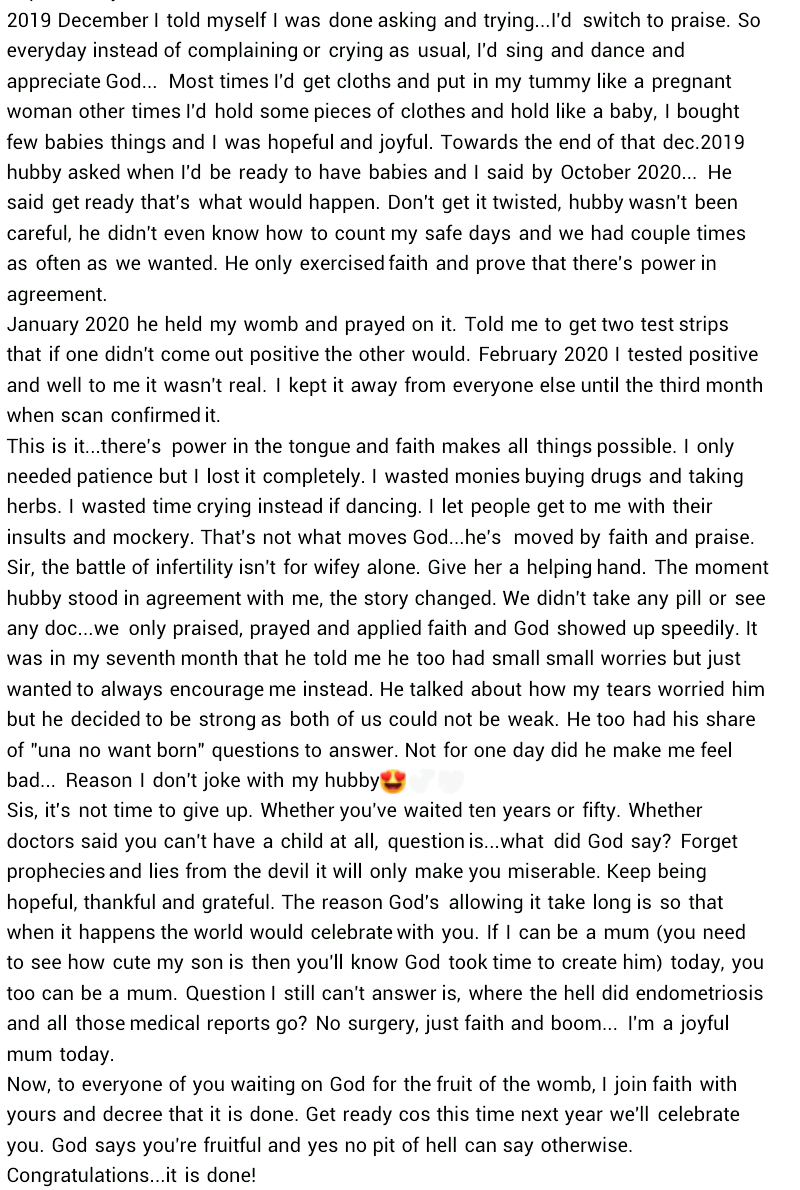 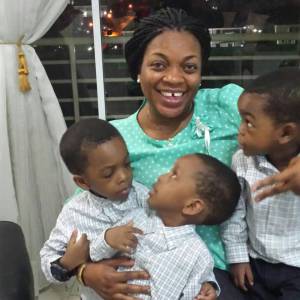